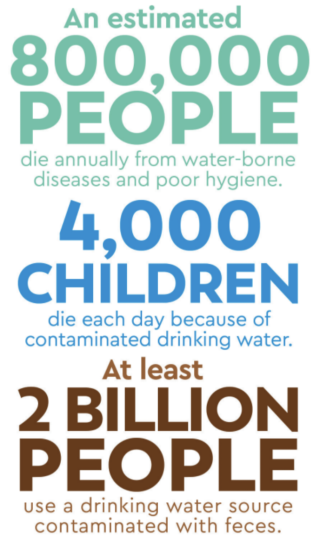 This breaks our hearts as it must break God’s.

We can change this, but it isn’t easy.
Changing the world is hard. Let’s get to work.

TBM Water is using four approaches to address this crisis:

The water people desperately need often is right below them. By partnering with TBM Water Impact, you are helping people get the water they desperately need by drilling wells in villages around the world to provide clean, reliable and accessible water.

Our water well drilling process is simple, proven and easily replicated by local residents. We secure the necessary drilling equipment for each village we serve and teach a church how to drill and maintain a well. We then assist them in drilling another and then we supervise them drilling yet another. Then, we leave the equipment so that church now has a ministry of providing water to neighboring villages.

It’s empowering the local church to further their work, sharing about the living water that is Christ while providing physical water to nourish people’s lives.

Throughout TBM's travels, we have discovered many pre-exisiting wells that aren't being used. In fact, 30% of all wells in Africa are broken.

When they break, local residents walk away and return to previous water sources, which are often remote and unsanitary. Our goal is to train local residents how to evaluate the broken well and determine if it is worth repairing. If a well is deemed salvageable, teams are taught how to restore it for use. This allows existing wells to once again be utilized and locals have the ability and skills for these repairs.

We are proud that our systems and filters are made in the U.S. and have been confirmed by a Food and Drug Administration-registered lab to remove harmful bacteria and reduce viruses.

A Bucket Gravity Drip System is made from plastic buckets and is ideal for small families or areas where there is no electricity. It includes a simple drip filter, pre-filter and spigot. Simple construction techniques make this system easy to build and maintain. A 4-by-4 inch ceramic filter containing silver-impregnated activated carbon is placed between the plastic buckets. Water is filtered as it flows from the top bucket to the bottom.

Small, suitcase-sized units are used in areas where electricity is available. These are typically used at disaster scenes to provide clean water for kitchens, laundry and showers. Multiple stages of filtration screen out contaminants as small as 1/2 micron, which is 1/100 of the diameter of a human hair. Improvements to the design enables the unit to put out six gallons of filtered water every minute.

It’s not enough to provide clean water; we make sure the water remains clean for all to use.

Unknowingly, the people we serve often contaminate the water as soon as it leaves the well, causing illnesses that could have been prevented. By partnering with TBM, we seek to lovingly provide the knowledge and tools to begin the process of mindful hygiene.

Correct hand washing, for example, reduces diarrhea deaths by 44 percent. Something as simple as hand washing is a foundational step in saving lives from numerous avoidable illnesses.

While this knowledge is second nature to many, it isn’t in other places around the globe where knowledge of germs is limited. Through hands-on classes that incorporate the gospel and cover basic, practical and doable lessons where discussion is incorporated, individuals discover ways they and their families can be healthier.

TBM Water, in partnership with E4712 Artisan Soaps. is also teaching women how to make and sell utility and boutique soaps. A bar of soap is a simple tool. But, in the right hands, it can change entire families, even entire communities. This ministry is helping provide a path out of poverty.

With your support, TBM educates women on how to use local, renewable sources to create inexpensive, yet effective, bars of soap to help maintain basic health and sanitation while also providing a source of income. Empowering women, TBM lays the groundwork for them to become self-sufficient as small business owners to better support themselves as well as their families.

TBM and E4712 Artisan Soaps train women on the basics of soap making, entrepreneurship and business strategies. We teach how to make inexpensive “utility bars” for basic daily use. Then we also train them how to make “boutique” quality bars, which are scented, colorized and attractively packaged to sell in local markets. Selling just one boutique style bar can pay for supplies to make almost 10 utility bars.

TBM sponsors the projects and mentors the ladies as they begin to sell soaps and grow their small businesses. All equipment and materials are left on site for the group to continue making soap using the funds from each boutique style bar they sell.

Complete the form below

For years, Marsha Relyea-Miles had prayed for 36 remote villages in Papua New Guinea. She lived in them, ministered among them. She and her husband created the first written language for many of the Aruamu people. They then translated the first New Testament in 2005 and soon, the first complete Bible in the language will be published.

The people in these villages thirsted for water – the living water that is Jesus Christ – as well as clean drinking water that wouldn’t make the children sick and cut their lives short.

Marsha and her husband began serving in Papua New Guinea in 1985. The field was fertile, and people responded. Churches were started, as well as a Bible college. The gospel has taken root and is flourishing.

Physical water proved more challenging. Marsha tried every avenue she could find. Local drillers couldn’t get their equipment in. Some non-profit organizations could drill the well, but weren’t working in the area. Others could teach churches how to drill a well. But only one could do it all: TBM.

“We were the only people who could do both,” said DeeDee Wint, vice president of TBM Water. “We couldn’t get it out of our minds. We felt God impressed it upon on hearts. We had to do it. We don’t decline projects just because it’s hard.”

For Wint and her husband, Tim, it didn’t matter that it took three days to get from Texas to the nearest city to the Papua New Guinea villages. It took three days to gather supplies. It took another day crossing World War II era bridges to get where they needed to get. They slept in open bamboo huts with little electricity and no running water. All that mattered was the need and God’s call to meet it.

The TBM team overcame all the obstacles, sensing God’s presence with them along the journey. They found the parts they needed and made the necessary connections on an exploratory trip. The villages came together to support the effort, volunteering to help however they could and offering encouragement along the way. 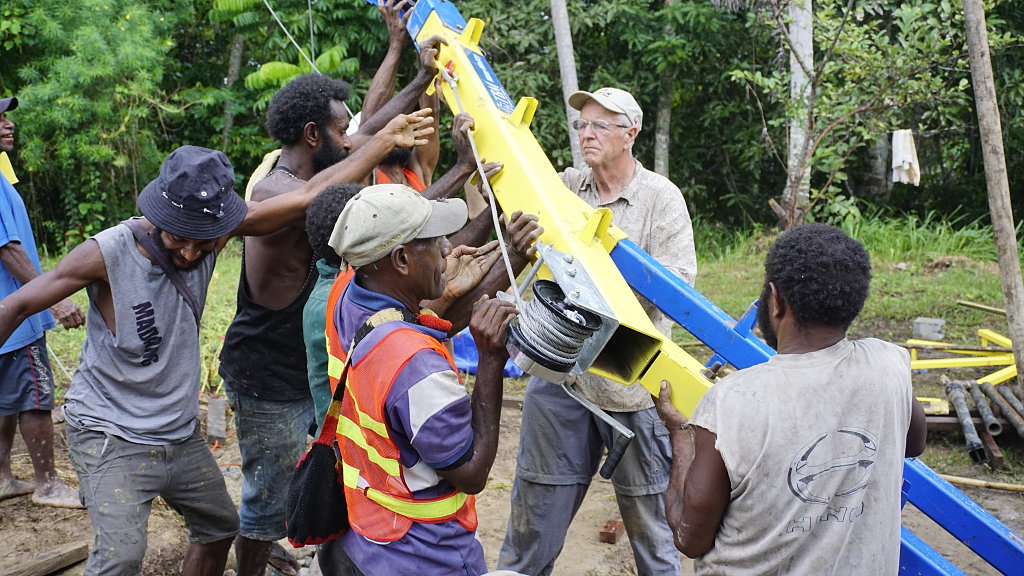 Still, with the rainy season nearing, it seemed all the effort to drill a well in late November would be for naught. When the rains begin, transportation in or out of the villages is impossible. After two weeks of hard work, it came down to one day for the team. If they were successful, the first village would have clean water. If not, the entire effort would have to wait another year.

“People doubted that it could be done but they had underestimated God’s people. We were amazed at the Aruamu people’s capacity to learn, their physical strength, their faith in God and their positive attitude. They didn’t see obstacles. When something went wrong, they just figured out how to fix it; no complaining, no doubts,” DeeDee said.

“At one point we thought the borehole had caved in on the bit 40 feet down. If this happens you can not only lose the borehole, you will likely lose the bit and drill pipe. Replacements are in Utah. After prayer, and discussion they just went back and started drilling again and it worked. We still don’t know exactly what happened. It was another God thing.”

The entire community participated in the effort. The hope and desire of the village was clear as they worked together for the betterment of all.

“The entire village came and watched, and helped,” DeeDee said. “The ladies carried water, the men worked the rig and the children dug clay out of the ground and made clay marbles to seal the borehole below the surface. When it was done, it was a community accomplishment.”

When the community dedicated the well, tears filled people’s eyes. When a child filled a five-gallon container with clean drinking water, people felt they were seeing the impossible. Several individuals remarked how God had shown Himself to be “plenty big” enough to meet their needs.

A local church team, The Aruamu Water Projects, there now, has the TBM drill and can use it in other villages. To qualify for a well, a village must raise 15 percent of the needed funds, form a committee to care for the well and have at least one toilet. Already, communities are working to become eligible. Another TBM team will visit the area in June to further train and drill more wells and encourage the church.

Everywhere the church goes with its drill, it leaves changed lives behind. Church members will share the gospel as they drill the well. People will be healthier spiritually and physically as a result. The water is a visible reminder of how God loves His people.

“They will be healthier because they’re not drinking out of a contaminated river,” DeeDee said. With open defecation everywhere, the water is quite bad. They are sick all the time.” 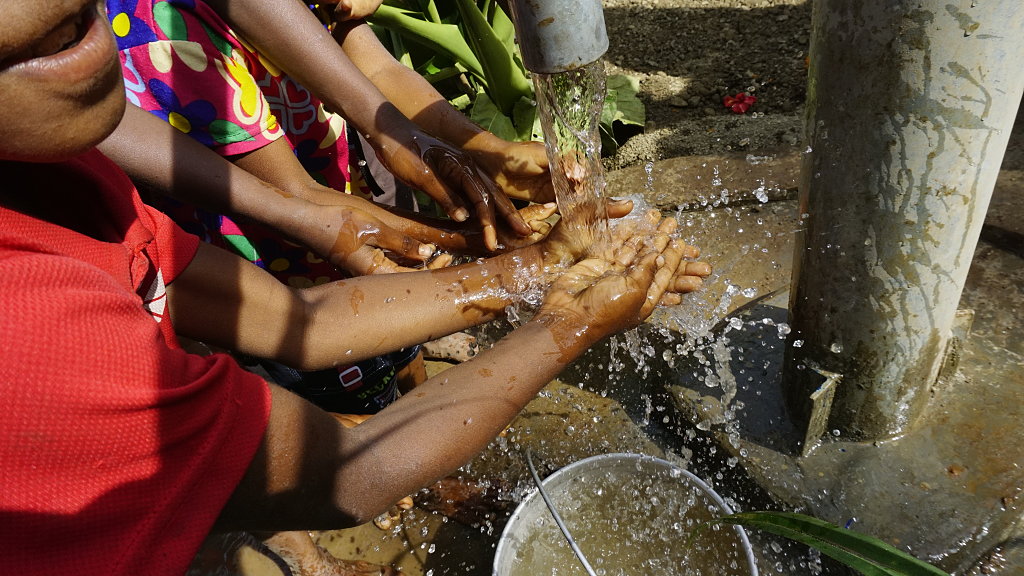