After 20 years, Lake View Baptist Church in Madisonville reached a milestone: new walls. A few short days later, the inside of the building was framed out, thanks to their friends, TBM Builders.

“When we showed up on Friday, there was this big metal building with all this material stacked in it, and by Monday morning at noon, we had about 100 running feet of the exterior walls already framed that stood up and ready to go,” said TBM Builders Coordinator Wayne Pritchard.

The congregation previously met at a property overlooking Lake Madison, but decades of use, building wear-and-tear and increasing attendance necessitated a change, Pritchard said. The church’s former facility served a maximum of 150 people in its worship center.The new metal building will accommodate as many as 350 attendees and includes space for a sanctuary, classrooms, kitchen and dining areas and recreation areas. And the new facility’s four-acre site features room for more facilities as needed.

Pastor Charleton Greene, who has served at the church for 12 years, said the move marked a major milestone for the church, which committed to a pay-as-you-go strategy to afford the new construction, he said, striving to keep the church’s financial burdens to a minimum.

The new walls won’t just serve LVBC on Sundays, Greene said. The church intends its new building to bless the Madison County community, too, as local outreach has been a mission of the church.

“It was a big deal for us, making the sanctuary big enough where we can accommodate other people when there’s a need,” Greene said. “We want to be the church where we can meet the needs of the people, so it’s a big thing for our community. It’s a big thing to our church not just for us, but we’re excited because it’s going to be able to help meet the needs of other people, as far as feeding, as far as blessing them financially and as far as allowing them to use our edifice when there’s a need.”

Despite encountering some setbacks, including unavoidable delays resulting from the COVID-19 pandemic, Greene said the multi-year process was worth the wait.

The Church Builders’ all-volunteer crew made quick work of the materials supplied by the church. TBM Builders provided all labor, and TBM plans to donate half the sheetrock required to finish out the structure when the church is ready.

Greene said he would recommend working with TBM to any church on a budget and said LVBC would work with the group again, if needs and resources aligned.

“It was a great experience, and I would recommend them to anyone who is in the process of trying to build a new sanctuary,” Greene said. “These guys do a great job. They’re working for the Lord, as they reiterated to us. And they’re doing the best they can, and we appreciate them.” 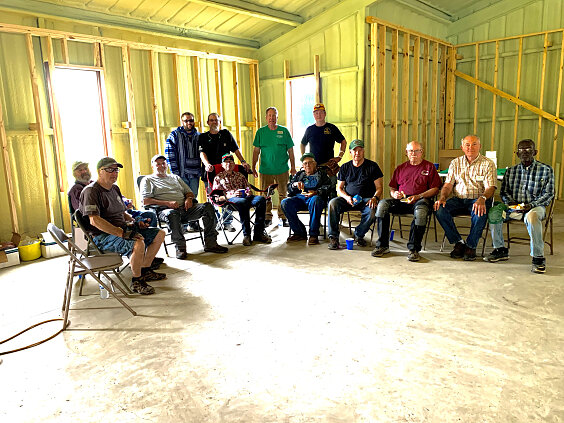 The church plans to invite the Builders crew back to see the new sanctuary, upon completion, Green said, to see what they accomplished with the help of the Lord.

“Six days, and they’re done,” Greene said. “They did a great job, and we’re just thankful to God that men like Texas Baptist Men are helping churches. And not only do they help, but you know, they do a great job.”

“My whole thing is that I want to build a nice sanctuary,” Greene said “I want it to be nice, and I can honestly say that these guys came in, and they are carpenters. They know what they’re doing…the statement they made was, ‘We’re building for the Lord, and He deserves excellence.’ And I think that they take that to heart, so I really appreciate what they’ve done for our congregation.”

“What we do is almost indescribable,” Pritchard said. “We had figured two weeks, but we finished early, so we came home. That’s just to tell you how nine older guys can work, when God’s given us the strength and power.” 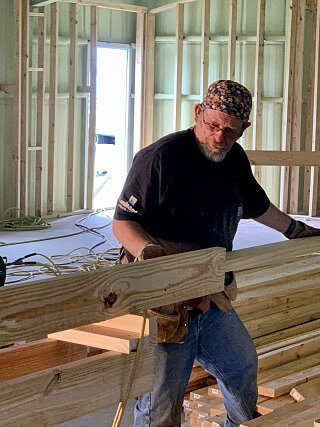 At 70 years old, Pritchard was the second-youngest man on TBM’s Church Builders crew in Madisonville. While worker age has tended to skew older, he said, the group welcomes anyone who wants to help. Completely comprised of volunteers, crews vary by job and depend largely on the schedules of the workers.

“It’s always a mixed bag of people, but we find the people that come to the build are exactly the people we need on that job,” Pritchard said. “Over and over and over, it works that way. And I guess God’s just timing it the way he wants it, and he puts the right people on the right schedule at the right job, every time.”

Although Pritchard works with a seasoned group of volunteers, the Builders welcome anyone who wants to help, no experience required. New recruits shadow veterans to learn the skills of the trade. And Pritchard said he hopes a younger crowd might be attracted to join the work, eventually, even if only for a day or two, rather than the full two weeks typically spent at each job site.

Pritchard’s crews know God has a plan to utilize the facilities Church Builders construct, and the benefits of the experience extend far beyond the receiving congregation, he said. When thanked at a previous job site, Pritchard said he appreciated the feedback, but the blessings run both ways.

“God is giving us something inside that I can’t explain,” Pritchard said. “It’s just the feeling of peace, of comfort, of strength. He’s just instilling inside of us that we’re doing his work the way he wants us to do it, and there’s no way to describe that, really. You have to feel it to understand.”