It didn’t take long for TBM Disaster Relief volunteers to make their first friend upon arriving in Nashville, Tenn. Shortly after they set up a mobile kitchen at New Season Baptist Church, 8-year-old Stephon showed up. He quickly began asking questions and getting to know the Texans.

Why were they in Nashville? What are they doing at the church? Where are they going to sleep? Can he help?

The young man stuck by their side all day as the TBM Rapid Response Unit prepared 300 lunches and 300 dinners for people whose lives were turned upside-down days earlier by a series of tornadoes that devasted Tennessee. The storms killed 24 people and injured 88. The twister that struck Putnam County had winds as high as 175 mph.

In the span of a few days, TBM volunteers prepared more than 2,400 meals and distributed them with New Season Church members to communities that lost electricity. For many of the families the volunteers served, TBM was their only source of hot meals during some of the most difficult days of their lives.

“We got to share with them,” said Gary Dusek, a TBM volunteer from First Baptist Church in Sulphur Springs. “At points, it got quite emotional. The tornadoes affected some rough parts of town. They’re really hurting.”

The team worked from before sunrise to after sunset to meet needs however possible. The group provided meals to children as they left school for the day to make sure they’d have something to eat. The Texans delivered supplies to an elementary school that served students who had been affected.

“It’s amazing how God is putting everything together – not only the survivors, but the church members that are helping serve the community,” said TBM volunteer Sonny Garza, a member of Faith Baptist Churcxh in Benivides. 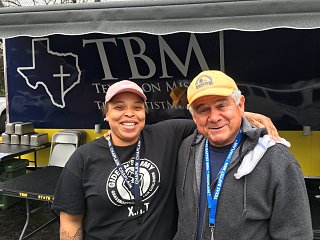 As TBM volunteers served, people were overwhelmed with gratitude. Individuals thanked the men for helping, gave them hugs and welcomed them with conversation.

None were more grateful than Stephon. The second day he knew the TBM volunteers, he asked his grandmother if he could go to the church service with them. She agreed, and he sat between two TBM volunteers during the first worship service of his young life.

Near the end of the service, the pastor made an altar call. Stephon asked his new friends what the pastor was talking about and why people get baptized. After a short conversation, Stephon professed Christ as Lord.

“The Lord was really speaking to him that day,” Dusek said. “It was wonderful.”