Families. Children. Teachers. Residents. Law enforcement officials. A shooting at a Uvalde elementary school that left 19 students and two teachers dead has shaken everyone in town.

People gathered around Robb Elementary Tuesday night trying to figure out just what happened in their hometown. Tears were shed. Hugs were given. Hearts were broken. Emotions were raw.

“The city is in shock, in mourning,” said Sonny Garza, a TBM chaplain serving in the aftermath of the shooting.

Garza is one of four TBM chaplains ministering in Uvalde in the aftermath of the shooting. Working alongside law enforcement and churches, the chaplains are helping people work through their emotions as well as offering to pray with them. Few people have turned down Garza’s offer to pray.

“I seek to comfort them,” Garza said.

TBM chaplains are specially trained to know how to minister in the aftermath of crises. They most often serve after natural disasters such as tornadoes, hurricanes and floods, but have also served after disasters such as a fertilizer plant explosion and the 9/11 terrorist attacks. 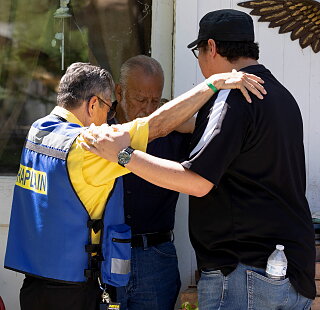 Ministering to Uvalde families whose children have died has been the most difficult, Garza said. They are seeking to come to grips with the reality that their young children are dead and emotions are running high.

Garza relies on the Holy Spirit to guide his actions and words. He says “very few words,” rather he listens to people share their stories and offers to pray with them when he feels led.

“It’s devastating for everybody,” he said.

TBM Executive Director/CEO Mickey Lenamon urges people to continue praying for Uvalde in the wake of the third deadliest shooting in the nation’s history.

“People have lost their sons, daughters, nieces, nephews, friends and neighbors,” Lenamon said. “The pain is deep. This tragedy will leave a lasting imprint on people of all ages.”

TBM chaplains will continue serving as long as needed.