WARSAW — Tetyana had a job. A home. Friends. A life. And a grown daughter who was just starting hers. Then the explosions started near Kyiv, Ukraine.

“For 48 hours, me and my daughter were lying on the floor waiting for death,” she said. “In the last moment, we decided to pack quickly, our most needed things, and just flee Kyiv. The war started on Feb. 24 and on the 26th at 1:00 p.m., we left Kyiv.” 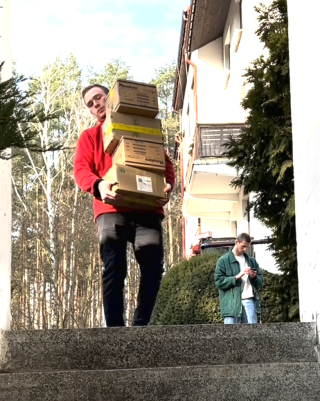 They drove until they encountered a 31-mile long line of cars waiting to get into Poland. There, they abandoned their car and boarded a bus. “At 2:00 a.m., on Feb. 27, we finally crossed the border.”

Poles welcomed them as they have hundreds of thousands of others. By God’s direction through Polish Baptist volunteers, Tetyana and her daughter ended up at the Baptist seminary in Warsaw.

“God has placed Ukrainians in our churches over the past 10 years, and they are instrumental in this effort,” Wichary said. “When the fleeing Ukrainians arrive in our churches and can talk with, relate to and begin to process what happened with people who know their language, culture and customs, it helps them switch from fear toward comfort.” 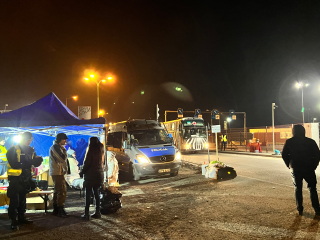 After a long pause, Tetyana added, “I’m thankful to God because I’m Orthodox. I pray every day. And yesterday we had Baptist church service here, and I cried all the time when we prayed and worshipped God. People are so good to us. I’m thankful to God that He provided a place for us here, because me and my daughter thought that we would sleep on the streets when we arrived in Warsaw.”

In many ways, Baptists in the region like the Polish are the face of the faith in the crisis as Christians connected to the Baptist World Alliance around the globe line up behind them to support ministry to those impacted by the Russian invasion of Ukraine.

TBM is one of the groups that is responding to this crisis. Through significant funding, it is supporting four shelters in churches in Poland and Ukraine. A TBM team is currently on the field meeting specialized needs and providing logistical support to the Poles.

“The eyes of the world are on Ukraine,” said Mickey Lenamon, TBM executive director/CEO. “In the middle of everything that’s going on, Baptists from around the globe have come together to meet needs and share the love of Christ to people during their most difficult days.

“We are honored to be part of that. The Polish are incredible. Their faith is inspiring. They serve around the clock and never seem to tire. God is truly working through Polish Baptist churches.”

Ukrainian Baptists have cared for more than 45,000 people through shelters and aid stations. Hungarian  Baptist Aidalso is serving in the region. Polish Baptists have served thousands more.

Many of the refugees, like Tetyana and her daughter, aren’t sure where they will go next. Through a texting group of their friends, they understand their old neighborhood is filled with landmines. Returning is becoming less likely as the Russian onslaught continues.

But at least they have a safe place to stay with people who care about them. And a God who has a plan for their lives.

“We have been here for three days now,” Tetyana said. “Now, we are trying to calm down and think about the future.”