JACKSON, Ky. – Chelsea has two children, and another set to arrive any day now. That’s enough to keep anyone busy. Then several feet of mud and river water poured into her home.

Neighbors rallied around her to help, but the task was simply too large to tackle. “We prayed for someone to help.”

Then a group of Texans in yellow shirts arrived. In one long, grueling, mud-soaked day, the Texas Baptist Men flood recovery team removed all the drenched sheetrock, flooring and furniture from Chelsea’s home to make it ready to rebuild.

“God answered the prayer of a neighbor,” said Jerry Hall, who led the team who worked on Chelsea’s house. “We came in and did the house today. We’re praying everything will be OK moving forward.” 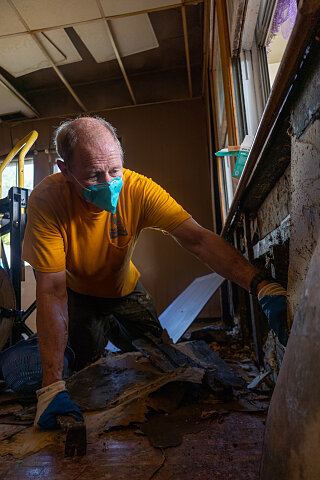 At least 37 people died recently in widespread flooding across Eastern Kentucky and many people have lost everything they owned. The economically-challenged region also has one of the lowest rates of flood insurance in the nation, compounding difficulties as homeowners try to claw out of the predicament.

“When a disaster hits, people are in positions they can’t get out of on their own,” said David Wells, TBM Disaster Relief director. “TBM volunteers come alongside families like Chelsea’s to accelerate the recovery process. Christ calls us to help the hurting, and that’s exactly what we’re doing in Kentucky.”

TBM flood recovery teams are saving every family they serve thousands of dollars. They’re also lifting spirits as they go house to house. Volunteers talk to people, empowering them to unpack the trauma they’ve experienced. One woman shared that she woke up to several feet of water in her house. She, her husband and son swam down the street to safety. Another lady tried desperately to save her horse but was unable to do so.

When the opportunity arises, TBM volunteers offer to pray with people. They’ve distributed 34 Bibles and shared about God’s love.

“People are in shock,” Wells said. “They've lost everything and are struggling with what to do next. TBM volunteers are providing the help they need to replace the hurt with hope.”

Sometimes that ministry means cleaning out a flooded home. Other times, it’s as simple as doing a load of laundry for someone who can’t because their washer no longer works. A TBM laundry unit runs from 4:00 a.m.-11:00 p.m. each day as volunteers wash, dry and fold loads of clothes and blankets for free that come in drenched with water and covered in mud.

Some people bring a trash bag full of items to be washed. Others bring several bags. One family brought an entire truck bed of clothes.

“They show up in disbelief,” said Sid Riley, a TBM volunteer on the laundry team. “They want to know how much it cost. They can’t belief it’s free. One woman came in with a small load, and we asked her if she had any bedding. We want to help. They’re very grateful.”

TBM flood recovery, shower, laundry, feeding and chaplain teams continue to serve in Eastern Kentucky and will as long as needed, Wells said.

“When there’s a need, TBM volunteers seek to meet it,” Wells said. “They’re stepping up again here in Kentucky. They’re transforming lives in the name of Christ. Please lift the people of Eastern Kentucky up in your prayers as well as TBM volunteers who are serving.”