TBM Disaster Relief teams scattered across Texas to respond to a series of tornadoes that caused devastation across the state.

Jacksboro was particularly hard hit. The EF-3 tornado ripped the roof off the high school, struck the elementary school and left a 2-mile-wide gash of damage in the community. 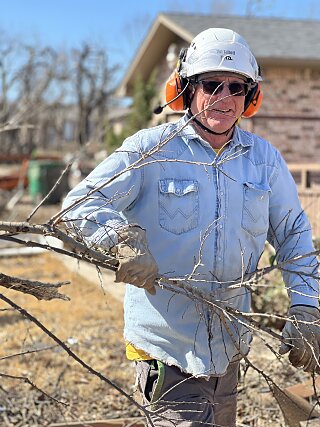 Despite the storm, Jack Maddox, pastor of First Baptist Church in Jacksboro, said his community is determined to push forward.

“We’re good,” he said. “The sun is out. We are recognizing what has taken place and what we need to do to recover. We had no loss of life, which is miraculous.”

In addition to bringing in volunteers to clear trees and limbs off houses, TBM provided an RV for the pastor and his family to stay in after the storm demolished their home.

“We never stopped to wonder if Texas Baptist Men would be here,” Maddox said. “We knew Southern Baptist disaster relief would be here. We’re grateful.”

In each location, chainsaw teams cut and removed fallen trees and limbs. Other volunteers picked up debris in yards. House by house, TBM teams transformed neighborhoods.

Along the way, they lifted spirits by connecting with homeowners. They prayed with people, hugged them and offered encouragement.

“Each of us are called to share God’s love,” said David Wells, TBM Disaster Relief director. “Across Texas, people are hurting after the tornadoes. Their home and property has been torn apart. We’re striving to clear a path for recovery as we minister to them.”