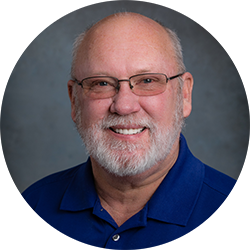 Wells has served as interim director of TBM Disaster Relief since September. Under his leadership this fall, TBM volunteers responded to hurricanes in Texas and Louisiana as well as an ice storm. In one stretch, TBM disaster relief volunteers delivered help, hope and healing for 75 straight days.

Wells joined the TBM staff in 2019 as associate director of disaster relief. He previously was involved in Southern Baptist disaster relief ministry in Missouri and Wyoming, where he also was pastor of several churches. He has served after a variety of disasters, including hurricanes, tornadoes, floods, ice storms, snowstorms, fires and more.

“Being a part of disaster relief for over 25 years has been one of the greatest blessings of my life,” Wells said. “Now to be honored to lead TBM in a field that God has called me to I am truly blessed.

“I have always seen God at work in disaster relief. TBM volunteers have followed God’s call on their lives by serving others to bring help, hope and healing to a hurting world. Therefore, I see a bright future of TBM joining God in His activity in the days ahead.”

TBM Disaster relief has provided practical help and spiritual hope for millions after disasters since 1967. The ministry has responded to every major natural disaster in Texas since then, most across the United States and many around the world.