For years, TBM Water leaders have said, "We don't turn down opportunities to serve just because they're difficult." They go where God calls them to serve.

So when a TBM Water team serving in the Tika refugee camp in Uganda encountered layer upon layer of clay, the volunteers pushed forward. When they didn't immediately find water as quickly as they hoped, they drilled deeper. They followed the Lord's leading. 100 feet. 150 feet. 200 feet. 250 feet. 281 feet.

Finally, water. Clean, clear, life-changing water flowing at a rate unseen in the area up to that point.

“This will provide a more robust source of water for the community,” said Tim Wint, the lead driller on the trip. “When we started out, the wells that were in this general area were rated for 500 people. There’s more than 2,000 people in just this little area. The entire camp is home to more than 120,000 people.”

God willing, this well is the first of many in conjunction with Southern Baptist Convention International Mission Board personnel in the area.

“Supported by your prayers, the TBM team gave this community access to clean drinking water,” said DeeDee Wint, vice president of TBM Water. “They also started training Ugandan and Sudanese leaders in water well drilling techniques. Soon, locals will be able to drill wells on their own with TBM equipment that remains in the area. Prayerfully, we hope clean water will become easily accessible across the camp.

“Just as importantly, the first well was drilled at a Christian community center. Water will help draw people to it, empowering leaders to share the Gospel and counsel the many people who have suffered trauma after trauma.”

The TBM mission team worked 12 hours a day, wrapping up after the sun set. The labor-intensive work is worth it, according to Dane Broussard, a member of the TBM team.

“I can’t think of anything more overall impactful to an individual and/or community than clean water,” he said. “Of all the worries the refugees must have, I hope we can alleviate a major one by providing them with clean drinking water and in doing so open their hearts to the light of Jesus Christ.”

TBM Water efforts to provide clean drinking water are made possible by prayer and financial support from people like you. 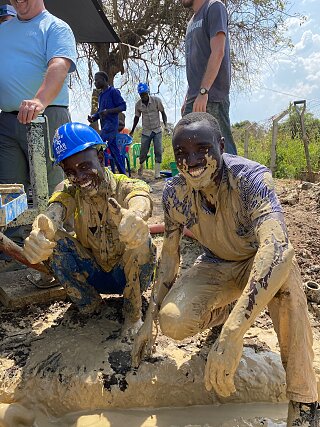 Another team member, Mark Vera, said he’s seen the impact a water well can have on a community, and prays this has a similar impact.

“I have been going on mission trips for years now and have seen and know the importance as well as life-changing effects that readily available clean water can have on a community,” he said. “I believe that the TBM Water ministry couples this with a local faith-based ministry so the people receive physical and living water. I am thankful that I am able to be involved in this ministry.”

After drilling a record 17 wells in 2020 despite travel restrictions, TBM Water is poised to transform lives in 2021 by training and empowering local believers.

“We now have several groups working around the world: Peru, Papua New Guinea and here in Uganda,” DeeDee Wint said. “We also have multiple teams of Texans that are taking large steps toward serving on their own. We are multiplying God’s kingdom around the world.”