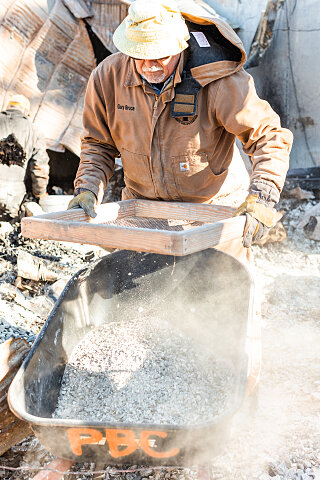 The Dec. 30 wind-fueled fire burned more than 6,000 acres of land and destroyed 1,100 homes in less than 24 hours, leaving behind a big mess to clean. Before the bulldozers could come through, however, homeowners needed to look through the debris if they hoped to salvage valuables that survived the fire – a monumental task for any family that just experienced such devastating loss.

Five TBM volunteers from Paramount Baptist Church in Amarillo entered the scene on Jan. 13 to provide extra peoplepower to sift through the ashes in search of valuables. The team was led by TBM Blue Cap Ernie McNabb.

“Everything was just burnt to nothing,” McNabb said about the scene they faced each day. “Cars, trucks, three-story houses just burned to the ground.”

The remaining 22 volunteers from Southeast Texas and Collin County joined the recovery efforts in Colorado on Jan. 15. A TBM team from Harmony-Pittsburg relieved them shortly after.

“My first reaction was utter shock,” said Curt Neal, who led the Collin County team. “We’re talking about a whole neighborhood totally burned to the ground, every single home. It was just mind boggling.” 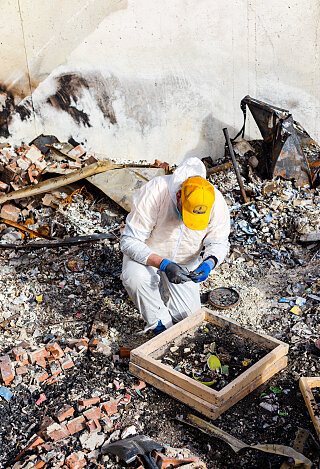 The volunteers dispersed into small groups of about five people, and each group worked on two to three homesites each day. Workers dusted ash - and some days even snow – off thousands of household goods and treasures buried deep in the rubble.

In all, the TBM teams have helped over 100 families reclaim possessions from what little remained of their houses. Among the many treasures recovered was a charred jewelry box holding a priceless ring the homeowner received as a gift from her mother decades ago. Another irreplaceable discovery was medals belonging to a Vietnam veteran homeowner. Volunteers also uncovered countless family photos, collectibles and more objects with special meanings to their owners.

“I get a real blessing out of finding stuff and helping people,” McNabb said. “It’s a way that I can serve Christ and help people in need.”

Of all the trinkets and treasures they found, Neal said the most unforgettable moment was one that will have an eternal impact.

“The best moment for me was witnessing a husband and wife accept Christ after listening to one of our chaplains give the plan of salvation,” he shared. “I believe moments like that on these kinds of trips are most memorable.”