TBM Disaster Relief assessors were surveying the damage the same day as the storm and chainsaw teams deployed shortly after. A TBM shower unit from Green Acres Baptist Church in Tyler as well as a TBM feeding team from Lindale are supporting the chainsaw teams as they cut and clear fallen trees and limbs in the affected area for free.

“We were monitoring the line of storms all day,” said David Wells, director of TBM Disaster Relief. “As soon as we confirmed a tornado touched ground, TBM volunteers were on the scene following the storm. Now, about 30 chainsaw volunteers are delivering help, hope and healing in the name of Christ during some of the most difficult days of people’s lives.”

Gene Walker, who is leading the Harmony-Pittsburg Baptist Association unit, said the damage is significant. The team already has cut down an 80-foot tree that was hanging over a house as well as a “huge” tree that was sitting on a propane tank. 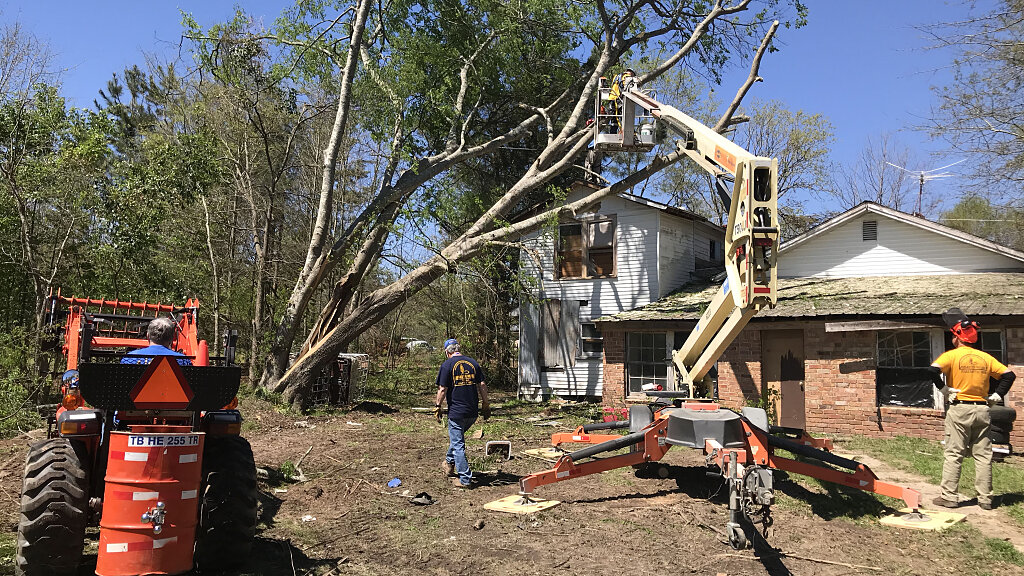 While the chainsaws cut broken limbs, the volunteers lift spirits. They encourage residents who were impacted by the tornado. They help people process what they’ve experienced.

“We’re doing this because we can,” Walker said. “We’ve been given the ability and skill to do this in the past. We love to help people. When the time is appropriate, we share the gospel. We pray with people.”

TBM Disaster Relief is made possible by gifts from people like you. 100 percent of donations made to TBM Disaster Relief supports disaster relief ministry. To give, visit tbmtx.org/donate or mail checks to Texas Baptist Men, 5351 Catron Dr., Dallas, Texas 75227.