Tammy looked around at the new residential homes on the campus of Breckenridge Village of Tyler (BVT) and was reminded again that dreams do come true.

Tammy has been a part of the BVT community through the day program for four years. Her time at the faith-based community for adults with developmental and intellectual disabilities has helped her grow in confidence and has given her many new friends, but with full occupancy, there was no chance for her to become a full-time resident.

Thanks to the support of generous donors and the direction and labor of Builders teams from Texas Baptist Men (TBM), on May 17 the BVT community celebrated the grand opening of three new homes, enabling Tammy and others anxious for long-term placement the joy of calling Breckenridge Village “home.”

“I’ve waited so long for my dream to come true and it has finally happened,” she said. “Now I can move into Breckenridge Village and live like so many of my good friends. BVT is an answer to prayer for me. They make dreams come true.” 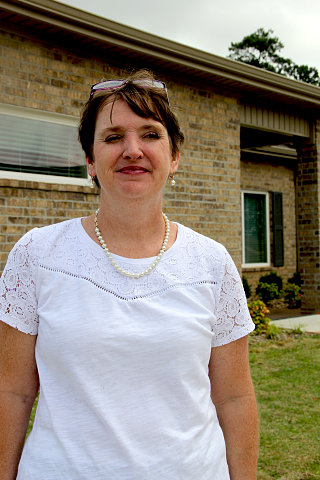 BVT Executive Director Steven Campbell said he has a waiting list of 80 people interested in placement at BVT.

“There is such a great need to serve people, and it is a tremendous blessing now that these new homes have been completed, which brings us to nine homes on campus,” he said. “We simply could not be more proud and grateful to be able to open our doors to even more people at BVT. These homes will fulfill the dreams of so many people, like Tammy, who long to call BVT home.”

Two of the new homes on the BVT campus are named in honor of Pierre deWet and Paul Powell (posthumously), whose families took part in cutting the ribbons to open the homes. The third home is named for Bill Pigott, who led the TBM builders team when the Baptist group constructed the first six homes and the Robert M. Rogers Chapel on the BVT campus 22 years ago. Standing at the entrance of the home bearing his name, Pigott swung a long arm in the direction of the chapel at the front of the 78-acre campus.

“I left a lot of sweat all over these grounds,” Pigott reflected. “I was involved in everything on this campus except the pool. Texas Baptist Men built everything here. It’s such an honor to have taken part in this and to have my name on a house.”

Mickey Lenamon, Executive Director / CEO of TBM, said naming a home in honor of Pigott is fitting, because “we are remembered because of the work of Bill,” he said. “TBM is a special group because they are men and women who want to build for the glory of God; they want to make an impact and be a part of this community,” Pigott said. “They share Jesus with a hammer in their hand.”

Gary Morgan and Ralph Stephenson participated in the building of the three buildings and said they “were here when these homes were nothing more than dirt.” The two were instrumental in much of construction, and Stephenson served as lead builder for the cabinetry in the spacious kitchens of each home.

Morgan, a resident of Gatesville, Texas, lived on the BVT campus in a trailer for a year during the construction of the three homes. His wife, Nancy, participated in the building project as well. Many TBM teams are husband and wife teams, Morgan noted.

“I started helping my dad in construction when I was 16 years old and have been doing it ever since,” he said. “On these homes I oversaw projects from framing, cabinets, doors, and windows. Throughout my time working here, I think it was the attitude of the residents that inspired us to continue working. Throughout the three-year project, we had right in front of us the motivation for what we were doing.”

Touring the newly opened homes, BVT employees Dianna Martin and Viana Scoggins said they were excited about the additional residents who would now call BVT home.

“We know there are many families who have been waiting for this,” said Martin, a weekend house manager at BVT. “These beautiful new homes are such a wonderful solution. I love this work and embrace it as a calling. Serving the residents of BVT is a blessing to me.”

Brian, a BVT resident for 16 years, walked through the Bill Pigott Home and slowly examined aspects of the open-concept kitchen, living and dining area, the exercise room, spacious covered back porch, and bedrooms waiting to be personalized.

“This house is a lot bigger,” he observed, adding that he would be moving into the Pigott House from another residence on campus and had already picked out his bedroom. “I like living here and it really is the best place for me.”

Breckenridge Village has made an impact on hundreds of residents through the years but also on their extended families, said Leslie Moulton.

“When Breckenridge Village was still being built, my grandmother, who was a widow and sole caregiver, applied for her son, my uncle David, who was severely autistic,” Moulton said. “She was aging and was becoming unable to care for him physically.”

Moulton, who serves as scholarships and grants director at Dallas Baptist University, said even in the early construction phases, said it was obvious BVT “was going to be a great place,” she said. “I was younger and trying to help my grandmother where I could, as I was my uncle’s next of kin. I had no idea places like this even existed.”

Moulton is emotional as she remembers her uncle, who passed away in 2016.

“BVT was truly a godsend for our family,” she said. “Regardless of who was on staff, they cared for David and wanted him to grow and learn new skills. They set careful, attainable goals, and always tried to help him know that he was loved. It was amazing to watch him become more independent and make new friends.”

Kevin Dinnin, president and CEO of BCFS system, was instrumental in helping BVT become a reality two decades ago, acting on the dream of Jean Breckenridge, who had a desire to establish a nurturing home facility which would be able to care for her son, Jimmy.

“I know Jean Breckenridge would be so proud to see this campus today,” Dinnin said. “BCFS has a vision to work to strengthen families to be better parents, students and workers. That rings true at BVT as well. BVT helps residents grow to their full potential.”

Texas Baptist Men at work “is an amazing sight to see,” said David Dykes, pastor of Green Acres Baptist Church in Tyler. “When Breckenridge Village was launched in 1998 with the vision of Kevin Dinnin, TBM showed up like a wave, trailer after trailer, camper after camper. They set up and went to work and built this whole place and they are still doing it today. Because of Texas Baptist Men, thousands of people throughout East Texas and beyond know of and are proud of Breckenridge Village.”