CHELM, Poland – With little more than the clothes on their back, hundreds of Ukrainian women and children wait hours in line to cross into Poland as part of the largest movement of people in Europe since World War II. They shuffle their feet quietly, even apprehensively, toward an unknown future in an unfamiliar country.

They’re stunned when they arrive. Volunteers have taped Ukrainian flags in their car windows and signs in Ukrainian reading “free rides to shelter.” The drivers take the refugees to the Baptist church in Chelm, only a few kilometers up the road where people from around the world – Poland, Latvia, England, the United States, to name a few – are offering a place of safety and security for a few hours, few days or as long as they need it.

Families sit in stunned silence in an impromptu reception area where church volunteers tell the refugees the church has free food, drinks, showers, and places to sleep. The congregation even has a set up children’s area where they can play with bubbles or watch educational videos projected on a screen.

“This is what Jesus calls His believers to do all the time. Polish Christians are taking the teachings of Jesus seriously and living them out each day during this situation.”

More than 60 percent of the 110 Poland Baptist churches are responding to the needs of Ukrainian refugees, many of them in dramatic and radical ways. At a warehouse in Chelm, donations for Ukrainians are coming in as fast as they are going out to Ukraine and to shelters across Poland. The deliveries continue even after Russia intensifies attacks on the western portion of Ukraine.

In north Poland, church members installed new insulation, air conditioning, heating, electrical lines, and beds in an old summer camp to revitalize it to house refugees. Before the work was complete, they were housing 46 Ukrainians – all from one family. It can now house 60 more.

The work is tough, but it must be done. “You just do it because it’s the right thing to do,” said Lukas, who is leading the camp effort. 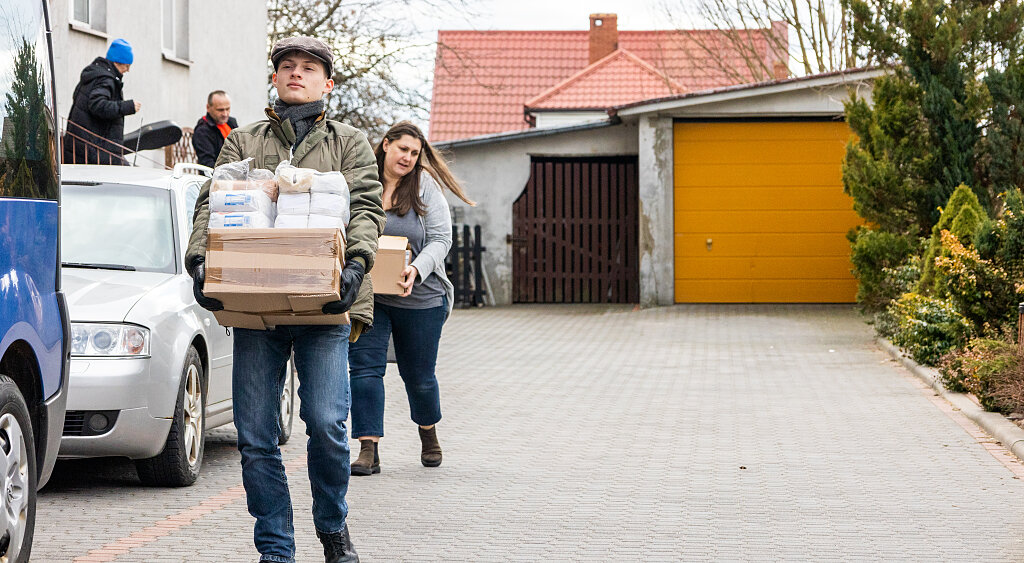 Near the Belarus border, a church is providing shelter for about 50 people and sending supplies into Ukraine despite increased Russian aggression. The effort is led in part by Natasha and Sergei, Ukrainians who came to Poland 10 years ago.

“We didn’t know why we were moving to Ukraine,” Sergei said. “We knew it couldn’t just be about money. Now we know.”

Natasha calls her parents who remain in Ukraine twice a day to find out if they’re still alive. After hearing their voices for a little while, she goes to work helping her countrymen. Between collecting and organizing supplies and registering people in the shelter, she moves quickly and calmly throughout the day.

“I see dread in their faces. I see their pain. I see tears in their eyes. I see the fear for their family they left behind. But I also see how much they feel secure here. When I hug them, they shiver with the happiness of being safe,” she said.

“I feel like I’ve done so, so little. I could have done so much more. But I try to do everything so they know we’ve done everything we can.”

Texas Baptist Men alone has committed $300,000 throughout the region to Ukrainian, Polish and Romanian Baptists, enough to support five shelters for six months. TBM has a team in Poland and is sending larger volunteer teams to serve in the Chelm church shelter near the Ukraine border.

“More than 1.5 million Ukrainians have sought safety in Poland,” said Mickey Lenamon, TBM executive director/CEO. “Baptists worldwide have joined together to meet their needs. TBM is honored to be part of that, whether it is through funding, sorting and loading donations in country, setting up beds, or even doing the little things that are needed like cleaning floors and toilets. We see what believers throughout the region are doing and are seeking to do likewise: follow Christ daily and share His love.”

The crisis will have a long-lasting impact in the region. Families are divided as fathers and brothers fight for their country. Many Ukrainians wonder if they will ever return home or if there is anything to return to.

Until they decide, Baptists across Poland are providing a place for them.

“The faces of Ukrainians arriving in Poland have the look of total despair, but I see the love of God poured out by the Polish people and see hope and comfort shining through,” said Gary Finley, part of a TBM team serving in Poland.