Surrounded by homes with burst pipes after the February winter storms, St. John’s College Heights Baptist Church in Austin did what it’s called to do: minister to its community in the name of Christ. The congregation helped people get the assistance they needed in the midst of the crisis.

Little did members realize water was filling up their own facilities. For a few days, water from broken pipes flooded the church’s sanctuary as well as education space.

“The ceiling, all that stuff, came out,” Pastor Michael Harvey said. “We had water all over the place.” 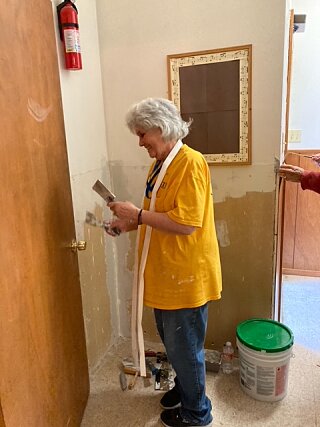 Looking for help, Harvey reached out to TBM as the congregation dried out the buildings. Shortly thereafter, a TBM rebuild team from Central Texas arrived with a load of sheetrock and went to work. Soon, the walls were sealed again and TBM is looking for other ways to assist the church.

Harvey described the assistance as gift from God.

“It means a whole lot,” he said. “It comes in the time of a pandemic. We had a pipe burst. People aren’t coming to church. Giving is down. This is an incredible blessing.”

Charles Baker, a member of Crestview Baptist Church in Georgetown who led the TBM team, is thankful for the opportunity to strengthen a church committed to its community.

“This church is a lighthouse in its neighborhood,” he said. “It stands out. The buildings stand out. They need to be able to stand out.”

St. John’s is one of nine homeowners and churches across the state where TBM is helping people that are still recovering from the winter storm. Combining the efforts of rebuild teams, supplies of sheetrock and expertise, TBM leaders are strengthening homes and congregations in difficult days.

“Both homeowners and churches didn’t have the right coverage or got denied on the claim,” said Rupert Robbins, associate director of TBM Disaster Relief. “On some of these, we’re running behind people with a net. After a disaster, it’s not as simple as turn the power back on and let’s go.”

The ministry goes far beyond the rebuild efforts.

“We provide help, hope and healing,” Robbins said. “I’ve had the opportunity to pray with these pastors and homeowners. We’ve helped them navigate the systems to get done what needs to happen.” 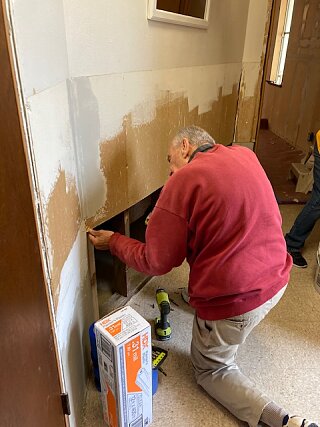 Robbins has been refreshed in visiting with the pastors of the churches. God is using the winter storm damage as an opportunity for churches to see new ways to serve.

Pastor Joseph Cartwright of North Star Fellowship in Irving has seen that in many ways. A TBM team installed sheetrock where the church is meeting in an apartment complex.

“This was a big leg up for us to get the building back together so we can move toward some ministry goals we have. It was just such a blessing,” he said.

“We are experiencing a moving into position for how to effectively make Jesus famous in the days in which we’re living.”