The next day the large crowd that had come to the feast heard that Jesus was coming to Jerusalem. So they took branches of palm trees and went out to meet Him.

They began to shout, “Hosanna! Blessed is the one who comes in the name of the Lord! Blessed is the King of Israel!” Jesus found a young donkey and sat on it, just as it is written, “Do not be afraid, people of Zion; look, your King is coming, seated on a donkey’s colt!”

So the crowd who had been with him when He called Lazarus out of the tomb and raised Him from the dead were continuing to testify about it. Because they had heard that Jesus had performed this miraculous sign, the crowd went out to meet Him. Thus the Pharisees said to one another, “You see that you can do nothing. Look, the world has run off after Him!” -John 12:12-19 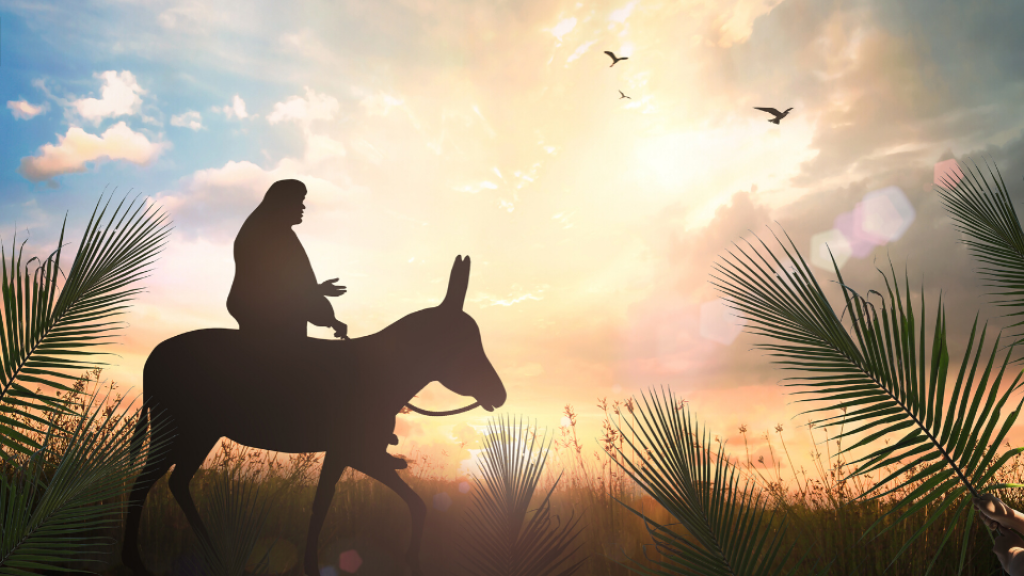 This scene is commonly known as the Triumphal Entry or Palm Sunday. Jesus’ entry into Jerusalem is cause for celebration, the welcoming of the long-awaited Messiah/King. It is the fulfillment of Old Testament prophecy in Zechariah 9:9:

Rejoice greatly, O daughter of Zion! Shout aloud, O daughter of Jerusalem! Behold, your King is coming to you; righteous and having salvation is he, humble and mounted on a donkey, on a colt, the foal of a donkey.

By riding on a donkey, Jesus was claiming to be the expected Messiah of Israel, and the crowd responded appropriately. But what does it mean for Jesus to be our Messiah?

The word "Messiah” is the Hebrew word for “anointed one” or “king.” Because of the many Old Testament prophecies about God sending this figure to them, the Jewish people were waiting expectantly for a “king” who would free Israel from the clutches of the Roman government. This warrior/king would overthrow the Romans and re-establish Israel as a separate nation once again. Jesus was not what they expected, but in this event, they still hoped He would fulfill this expectation.

To be sure, Jesus was the Messianic figure spoken of in the Old Testament. Yet, He transformed all conceptions of what the term meant. Jesus was more focused on building the kingdom of God and not the kingdom of Israel. This confused the Jews, which explains why they would cry out in victory over Him on Sunday, but on Friday would scream, “Crucify Him!” Oh how quickly our loyalty shifts when we don’t get what we want.

What does Jesus the promised Messiah mean to you and me today? Jesus is more than just our Savior. He is our King. To better understand Jesus as king, we should look at the “kingdom story” found in the Bible.

The kingdom story is about God being king of His creation. God has always desired to be the reigning king of our lives.

In 1 Samuel 8, God’s people decided they wanted an earthly king like the other nations. Out of God’s desire to give His creation free will, He granted this request. He gave them an earthly king. He still desired to be King of His people, but He allowed His people to choose another king in place of Him. This was Plan B.

The remaining portions of the Old Testament are record after record of humanity struggling to be their own king. Plan B did not work out very well. Remember: God didn’t initiate Plan B. Man did. People give God a hard time for what is written in the Old Testament, but God didn’t endorse the activities in the Old Testament as much as He allowed the consequences of sinful man to be played out on the big screen of Scripture for the rest of us to see.

Jesus came on the scene when people were looking for an earthly king to restore the kingdom back to its original glory. They had in mind the kingdom of David. God had in mind the kingdom of original creation. Jesus ushered in this new kingdom and this new way of living. Then Jesus died on a cross and made the final payment for the brokenness that resulted from the first sin in the garden. He redeemed humanity on the cross. And He will one day return to consummate the relationship. But until then, Jesus is king of His people (the church) and we are now living in a day where God’s Plan A is being realized once again!

As we prepare our hearts for the Easter celebration, let’s be sure to see Jesus as He really is. Immediately after He ascended into heaven in Acts 1:9, He was seated at the right hand of the Father on the throne of the universe. This is the Jesus we get to talk with today. He is not some small, insignificant genie we bring our wishlist to. He is the King of the universe and is worthy of respect and honor.