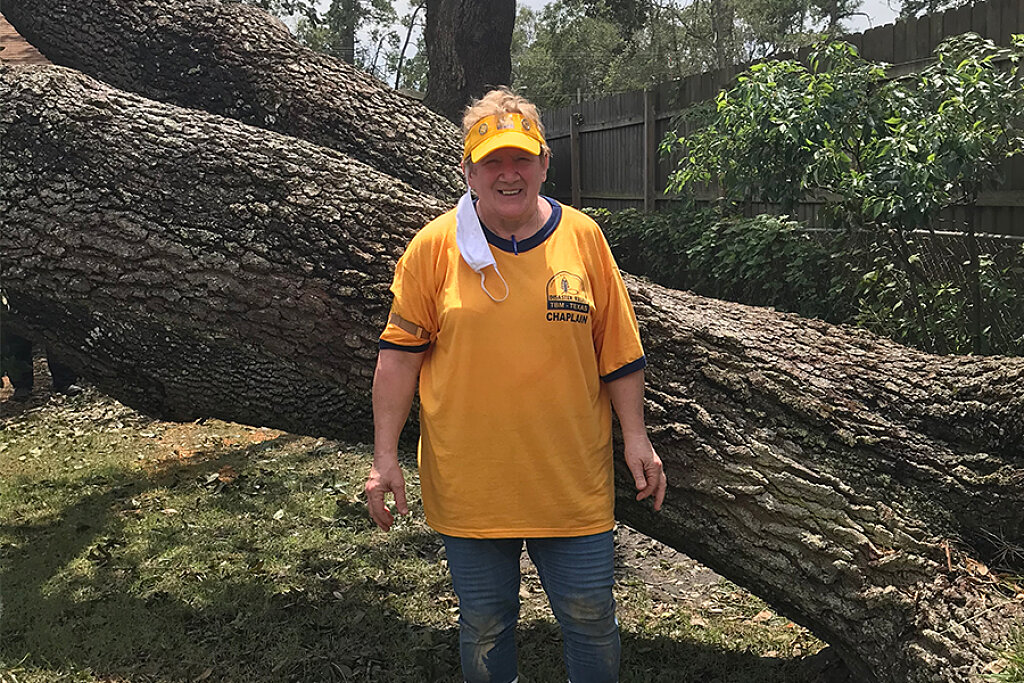 After the death of her husband in 2015, Bonnie Jacobs searched for something that would give her purpose in a new season of life. Sensing a call to serve those dealing with the aftermath of a tragedy, she quickly found that purpose in disaster relief ministries in Georgia, then later with TBM Disaster Relief.

Serving as both a chaplain and a member of a TBM chainsaw team, Jacobs was integral to meeting immediate relief needs and had the opportunity to sit with individuals and families to meet spiritual needs and share the Gospel.

“What gets me excited is all about people,” the Southwestern Baptist Theological Seminary student said. “It’s meeting people when they have been through a trauma or a terrible crisis in their life and to be able to minister to them in their brokenness.”

“Every time I go, I think I know what to expect,” said Jacobs, who has been on more than 50 disaster relief deployments. But each deployment brings with it new people experiencing a new trauma. “I think I know I can deal with it, but every time I’ve gone into a disaster area, my heart is just broken for these people.”

Although the teams are primarily there to aid in disaster relief, Jacobs says they prayerfully participate in Gospel conversations. The ministry usually provides natural opportunities to share the Gospel.

Most often the conversations happen over the course of a day spent clearing out debris. Disaster relief teams often build a bond with the families they are serving, so such conversations are typically received with a level of trust and acceptance.

During this August’s trip after Hurricane Laura, Jacobs led two people to faith in Christ and connected them with local churches.

“The most rewarding part of any deployment is seeing someone come to know the Lord,” Jacobs said, “especially if I’ve been the one who’s been able to walk them through the Scriptures and show them.”

As Jacobs sat with one woman who was frail from kidney failure and other health complications following Hurricane Laura, the woman said, “I talk to God sometimes, but I don’t know if He is hearing me or not.”

“What an easy way to walk into a Gospel conversation,” Jacobs reflected.

The conversation moved quickly, Jacobs said, adding that she believes the Holy Spirit had prepared the woman’s heart to be receptive, as evidenced by her making a profession of faith.

Learning that the woman was preparing to go into a major kidney transplant surgery, Jacobs said, “She couldn’t have gotten right with the Lord at a more opportune time. I told her that now she knows Jesus, she knows He is going to be with her through every step of the process of that operation, but if something were to happen, she is ready to meet Him.”

Jacobs says her time studying at Southwestern Seminary since 2016 has dramatically changed how she does ministry. Whether teaching her Sunday School class or ministering to people faced with tragedy, she is better equipped to respond to the difficult questions.