NAPLES, Fla.—Hurricane Ian is gone, and its floodwaters have receded. But devastating evidence of its presence remains throughout Naples, Fla., where Texas Baptist Men disaster relief volunteers are serving.

Random boats float in backyard swimming pools. Kitchen islands have floated away. Walls and flooring in many places remain soaked.

Rain and a 9-foot storm surge flooded entire neighborhoods in Naples and temporarily knocked out power to many in the area. 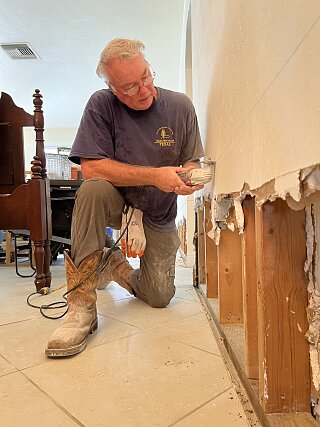 In all, the strongest storm to hit Western Florida in history has killed at least 105 people in the United States, in addition to lives claimed in Cuba.

TBM volunteers are making sure Naples survivors have the food they need to push forward and a path forward for recovery, even if the Texans have to clear it themselves.

Working alongside Louisiana Baptists, TBM volunteers begin work at 5 a.m. each day, cooking 5,000 to 6,000 meals that are distributed across the area.

Each meal gives people strength to rebuild and “gives them hope that someone out there cares—and that ‘someone’ is Jesus,” said veteran TBM volunteer Joe Crutchfield.

In the affected communities, a TBM flood recovery team from Southeast Texas is removing wet sheetrock, flooring, furniture and appliances. Team members then disinfect each home and let it dry out so it can be rebuilt. In one day, the team accomplishes what would take homeowners weeks or months to do.