“Our first date was a mud out,” said Dianne Crouch. She met Rick in Weslaco through her work with Texas Baptist Men and his with New Mexico Disaster Relief. The mud out “date” occurred later in Groves after Hurricane Harvey in October 2017; one month later they were married.

Dianne had been a TBM volunteer since 2011, three years after becoming a widow. She began by volunteering on a flood recovery team and then switched to the Incident Management Team doing administration.

“I love the opportunity to be able to serve the volunteers that the Lord sends to go out and to be His hands and feet,” she said. “We are one big family!”

Rick lived in Albuquerque, N.M., and started working with the New Mexico team in 2014. He worked with flood and fire recovery, as well as chainsaw and feeding teams. He also was their team chaplain most of the time.

“Since Rick and I lived in two different states, conventional dating wasn't an option so I received permission from the New Mexico Blue Cap (leader) to work with their team in Groves for a week doing mud out,” Dianne said. “I arrived on Sunday morning and met Rick at the church they were attending that morning. Then we attended another service at the church where they were staying. Then spent the rest of the week serving the Lord together doing mud out. It was an awesome time!” 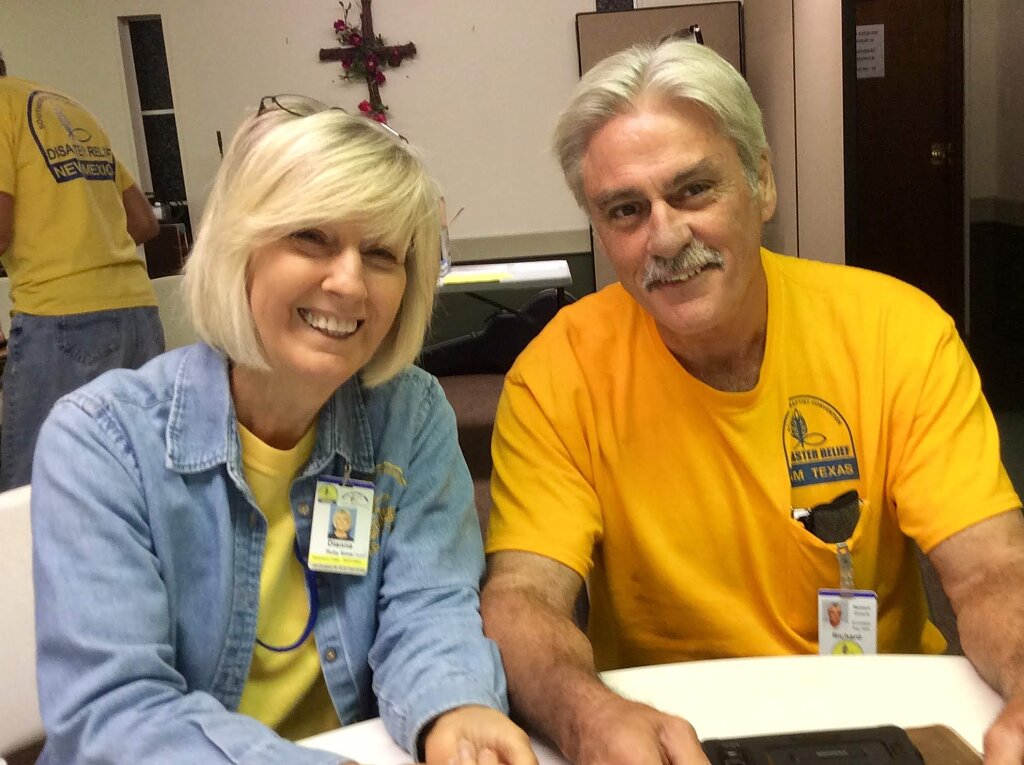 One month later, Rick arranged for Dianne to stay with some friends in Albuquerque, and she “drove up so we could spend some time getting to know each other.” They married on Nov. 28, before Dianne returned to Texas.

“We both felt this was the Lord's will and the direction He wanted us to go,” she said. “Six months later we moved to my home outside of Aransas Pass, and Rick started serving with TBM.”

Rick said he volunteers because the “love of Jesus Christ has so deeply transformed me that I am compelled to go out and share that love with others.” Dianne said she shares the call.

The “act of sharing with others continues to change, build and transform me,” Rick said. “It's that act of giving that gives so much back to me. I also volunteer to be part of a team of men and women working together to bring hope and comfort to families devastated by disasters. The fellowship within those teams is very special.”

Rick said he has “learned that it takes no special talents or skills to be a volunteer, only a desire to serve, getting out of your comfort zone in order to help someone experiencing disaster in their life.

“Every disaster is a bit different except for hurting people needing hope and guidance in putting their lives together again,” he continued. “That's when we (TBM volunteers) come alongside. We listen, pray and help evaluate their situation.

“That first contact has a huge effect on their hearts and minds. People are so grateful and as you often work with them for days as you are working on their home you'll witness God working in their lives. Sometimes slowly but often a flood of the Holy Spirit will come upon them and they want to know Jesus as you do.”

“To share Christ is the greatest moment in my life while working in disaster relief, to share what Jesus has done for me, your story is powerful,” Rick said.